Jamal and Wejdan. A family, a film, a restaurant…. and wishes that come true 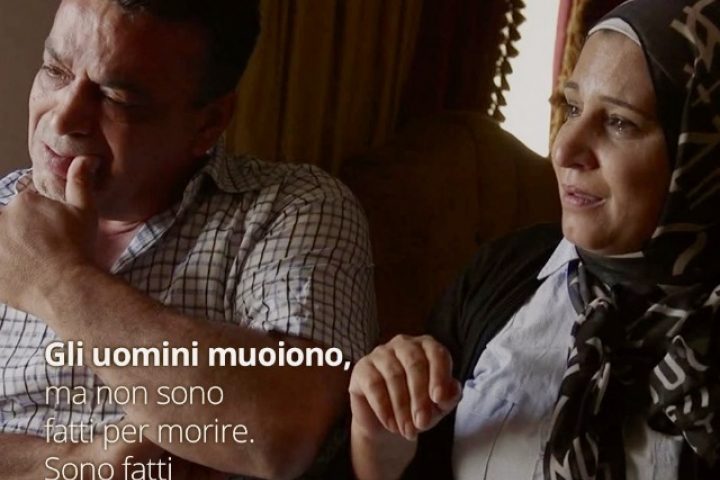 The “Lo sguardo dalle frontiere” (A look from the border) editorial is written by operators of Mediterranean Hope (MH), the migration project promoted by the Federation of Protestant Churches in Italy (FCEI). This week’s “look” comes from Scicli and Turin, where the story, hopes and dreams of a Syrian family intertwine with each other.

Jamal and Wejdan’s family arrived in Italy on a regular flight last year, thanks to the Humanitarian Corridors. Five children, a grandchild, lots of dreams and lots of projects, lots of memories, some terrible ones to forget, and others to be preserved and handed down.
Part of their story is told in the documentary film “Portami via. In viaggio con una famiglia siriana, tenendosi per mano” (Take Me Away. A journey with a Syrian Family holding hands) directed by Marta Santamato Cosentino, currently on tour throughout Italy, and today being shown in the Methodist Church of Scicli, with the director in attendance. The screening is open to all citizens, the local community, journalists and authorities.

Another part of the story relates to the first year in Italy of Jamal and Wejdan’s family. The Waldensian Diaconia, operating branch of the humanitarian corridors from the time of the landing in the airport up to a maximum of 30 months, provides them with food and accommodation, assists them during their insertion in the school system, provides career guidance and counselling services with business and credit experts, benefits and traineeships in companies. Together Jamal and Wejdan are a force of nature. Where one falters, the other takes over, when she hesitates, he dreams and plans. Jamal has a childhood dream: to own his own business. In this first year in Italy, supported by his family, the Waldensian Diaconia and his determination, Jamal continues to dream, tackling the difficulties of settling in and of bureaucracy. He attends an intensive Adecco catering course in Rome, takes over the management of a restaurant and three on-the-job traineeships, granted to three of his family members at their locale.

The story of Jamal, Wejdan and their family crosses another “border.” The first Syrian family-run restaurant” called Zenobia opens in Turin. “We chose this name because it represents our Syrian culture rich in art and history. Our food specialities are the typical Syrian-Lebanese dishes characterised by a Mediterranean flavour,” reads the restaurant’s Facebook page. Kaled, the oldest son, his mother and father will work in the kitchen, and his sisters will be the maître d’s. They will all pitch in to give a hand, the girls have experience working in other restaurants. They have saved and looked for the best ways to embark on this new journey in the business world. Jamal and Wejdan’s family will officially open the restaurant on 7 July 2017, in Turin.

SCICLI. FILM SCREENING: Wednesday, 5 July 2017 in Scicli at 7.30pm at the Methodist Church in Via Carioti, 2, free admission. Watch the trailer of the documentary

The humanitarian corridors are a pilot project organised by the Federation of Protestant Churches in Italy (FCEI), with the contribution of the 8×1000 fund of the Waldensian Church and Sant’Egidio.

The documentary “Portami via” is produced in collaboration with Invisibile Film, under the patronage of Mediterranean Hope-FCEI.