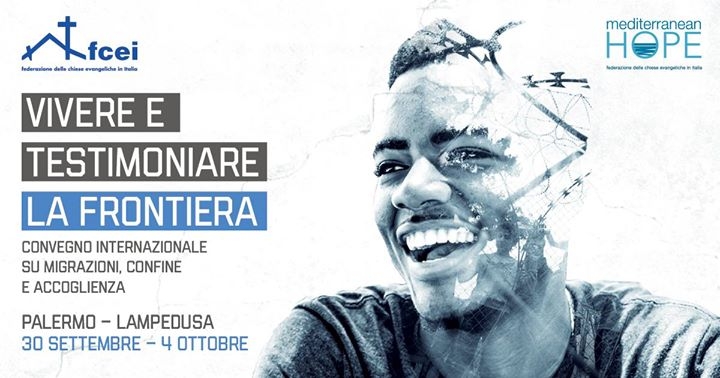 Paolo Naso – Political Scientist and Coordinator of the Mediterranean Hope – Project for Refugees and Migrants promoted by the FCEI.

At the end of a conference so full of analysis and contributions, it is difficult to draw conclusions that are not the repetition of what has already been so properly pointed out. Thus, I will just focus on some of the topics and be relating challenges that those who operate on the physical or mental “frontier” like us usually deal with. A frontier is a place that is by definitions full of people “different” by us that have asked to enter our territory.

For ease of reference, I will point out some of the issues we have discussed these days and for each of them, I will try to outline some possible work strategies. I will do these considerations by highlighting the contributions that have emerged these days and so by developing the many tales, proposals, and analysis shown.

This conference has been conceived and organized by churches, ecumenical associations, and believers who have spent these years to put in place the Gospel message. I do not need to remind the spiritual, biblical and theological reasons that have driven our commitment. I would just like to say a few words about the attitude, the “stance” that, in my view, we should pursue.

First of all, I would say an attitude of freedom. Freedom, to tell the truth, not to be conditioned by consortium actions or opportunities of the moment. It is with this attitude that from the beginning we have launched the Mediterranean Hope

– Project for Refugees and Migrants promoted by the FCEI., not by chance quoting Martin Luther King: Cowardice asks: is that safe? Opportunity asks: is that convenient? Complacency asks: is that popular? But conscience asks: is that right? Sooner or later it comes the time when we must take a position that is neither safe nor convenient or popular; but you must take it because it’s right. ”

A second attitude is what I would call “acceptance of vulnerability“. We work on a fluid matter with processes that are rapidly changing and require a continuous change of course. It is wrong to be fixed and useless to build large apparatus or it is risky to plan in the long run. Honestly, according to Bible every day its affection but with a design and a perspective in mind. Yet, with an attitude always open to the new and being inclined to change our working methods and goals.

The third, inevitable, word is that of “hope“. In an epoch in which we can see a wave that rejects immigrants and fears them as an economic, social, and even religious threat, we are evangelically bearing a “hope beyond hope”. Those who have experienced the “humanitarian corridors”, touched with this simple truth of faith. For instance, Falak a little blind girl, devastated by a disease that could certainly not be cured by living in a garage on the outskirts of Beirut, could recover her life. Today, Falak goes to school, speaks Italian and is a happy child because we have acted together and hoped beyond hope.