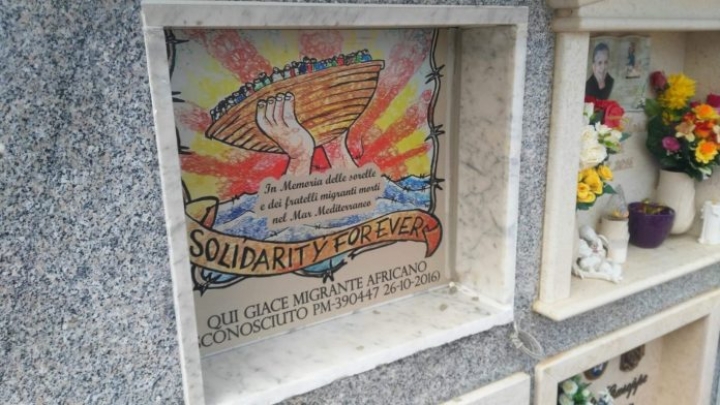 In the cemetery of Badolato, in Calabria, two drawings by Francesco Piobbichi depict two young migrants, victims without a name in the Mediterranean Sea. “An indictment against those who have turned the sea that united into the sea that divides”

Rome (NEV), 29 March 2018 – “Not only are lives buried in the Mediterranean Sea, but also stories of those who have no grave and of those who cannot be mourned. Other bodies returned by the sea, instead, are buried without a name, with a number often drawn on the limestone”. With these words  Francesco Piobbichi, illustrator and operator the Federation of Protestant Churches in Italy (FCEI) for the Mediterranean Hope Refugee and Migrant Programme, tells the NEV Agency of the ceremony that took place on 24 March 2018 in Badolato, Calabria to commemorate victims of the Mediterranean.

During the non-denominational ceremony two plaques were laid with the “Disegni della frontiera” (Drawings from the Border) by Piobbichi on the tombs of two African boys who died last year in a dramatic shipwreck and were buried in the town’s cemetery. The initiative promoted by the “Terra Madre – Borghi in Comunità” Association followed the “Ararat: 20 Anni d’accoglienza. Badolato Modello Interculturale Contro ogni Xenofobia” conference organised by the Italian Council for Refugees (CIR) in collaboration with the Municipality of Badolato and the SPRAR centre. The occasion marked the 20th anniversary of the landing of the Turkish-registered cargo ship, Ararat, which landed at Santa Caterina dello Ionio on 26 December 1997 with 825 Iraqi and Turkish, Egyptian, Lebanese, Aghan and Bengali Kurdish migrants on board.

“It is not easy to tell the story of the death of the nameless, and it is not easy to transform numbers into history, into memory. Yet, this is one of the main issues I have been working on for years with Mediterranean Hope. Together with the Forum Lampedusa Solidale we have restored the tombstones of migrants who died at sea in the cemetery of the island. I travel all over Italy with my drawings and talk about it. The drawings give me the opportunity to respect the faces, to recount with feeling what occurs in real life. It is not an artistic work, it is not a theatrical performance, but a story that becomes collective and that is told collectively,” explains Piobbichi, who adds, “not only are lives buried in the Mediterranean, but also the stories of those who have no grave, who cannot be mourned. Other bodies returned by the sea instead are buried without a name, with a number often drawn on the limestone. Even though this gesture does not restore the name of these people, it does give them back the dignity they lost at sea. I sincerely thank them, as well as those who have allowed this to happen. These two young men are now part of a collective history, those tombs now represent a gesture of solidarity between human beings and become an indictment against those who transformed the sea that united into the sea that divides. Transforming numbers into history, and transforming stories into stone, is a hard and necessary job in order to build the memory of tomorrow. My drawings of the border have become exhibitions, books, stories, posters; in short, a collective instrument that allows everyone to take part in the story and to find a frame in which to live as human beings. A frame that is valid for the living and for the dead”. 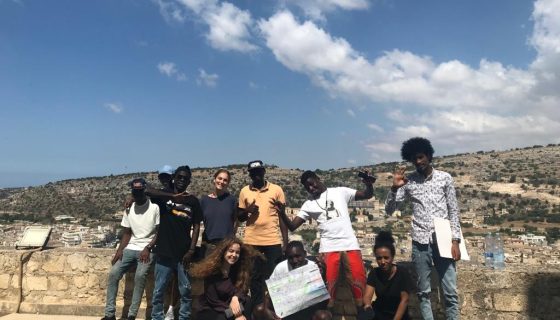 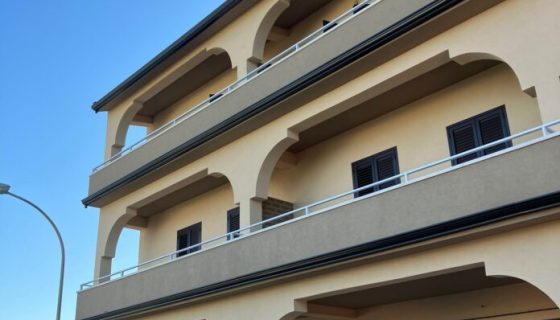