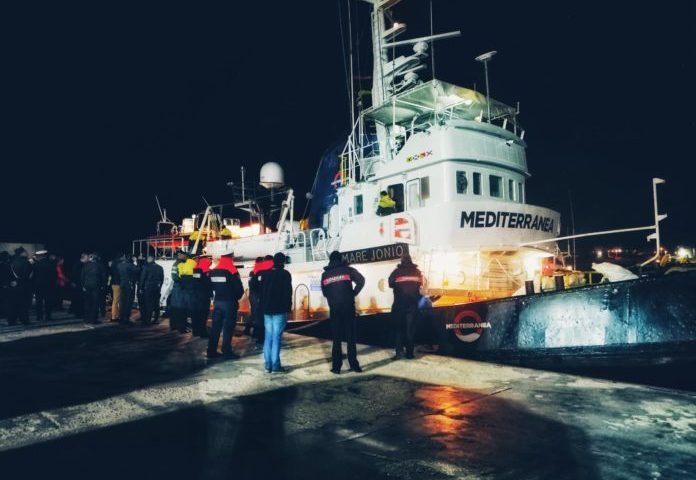 Lampedusa (NEV), March 20th, 2019 – After months we are back to welcome those who could escape from Libya. “Liberté, liberté, liberté” the migrants sing on board, and when the first of them step off the gangway of our ship and finally rests his feet in Europe, the crew, the humanitarian operators, the journalists and all those who are present applaud. Among those landing: men from Nigeria, Gambia, Senegal, Guinea Conakry, Guinea Bissau, Cameroon and Benin. Even though they are unwell from travelling, they are fine and happy. They receive the basic necessities that we distribute with a smile and board the minibuses that will take them to the hotspot of Lampedusa. Within an hour or so the landing operations ended.

Everything started yesterday morning, when less than a mile south of the island, the Mare Jonio by the Mediterranea Saving Humans came up on the horizon. On board 50 people rescued from a damaged dinghy. The information came from the Moonbird aircraft of the Sea Watch, after detecting a drifting boat about 25 miles off the Libyan costs. The crew of the Mare Jonio says that the people on board were very weak with serious problems of dehydration after a journey that took more than 2 days sailing. The ship had been banned from approaching the Italian coasts by the Guardia di Finanza, but the Master Pietro Marrone forced entering the Italian waters. On the radio the Master replied: «We have people to make safe, we do not stop our engines.»

Thus, Lampedusa returns at the heart of the national debate: dozens of journalists have arrived and a useless negotiation has started again – played on the skin of the people rescued after fleeing war, persecution and poverty. Mediterranean Hope also decides to express our point of view and together with friends of the local community we were in Lampedusa during the afternoon to reaffirm solidarity to all the people embarked by the Mare Jonio vessel, waiting to welcome them in the port of Lampedusa. Once terminated the picket line, we were ready for hours of exhausting waiting, when at 8 pm the news of the ship entering the port arrived.

The island is a strange place and at times it is like everything is reduced to the essentials. The people of the shipwreck arrive, people who escaped certain death and finally touch the ground. It is as if those people were extracted from the rubble after a catastrophe. However, who would ever think after a catastrophe to quibble about if and how to save people from under the rubble? Who would ever have the problem of considering those people a danger or would care to ascertain the nationality of those people? And, again, who would never dream of locking up the victims in a place of detention and, above all, those who would never dare to arrest the rescuers by imposing that they return to do their work.

What occurred yesterday helps us to re-establish priorities. Whoever is saved from the sea is welcomed in Italy and has the right to rebuild his life, after being transferred to the reception centres, with the possibility of requesting international protection. These people have the right to be welcomed in adequate facilities and supported along their integration process in Italy. At the same time, those who help should never be the object of instrumental political clashes, but rather an example of that courage and solidarity that protects not only life at sea but also our society from barbarism.

Beirut, MH: “We extend our condolences to the victims and those injured in the devasting explosions. Our operators are fine. Our hearts go out to the people and city, that were already strained”