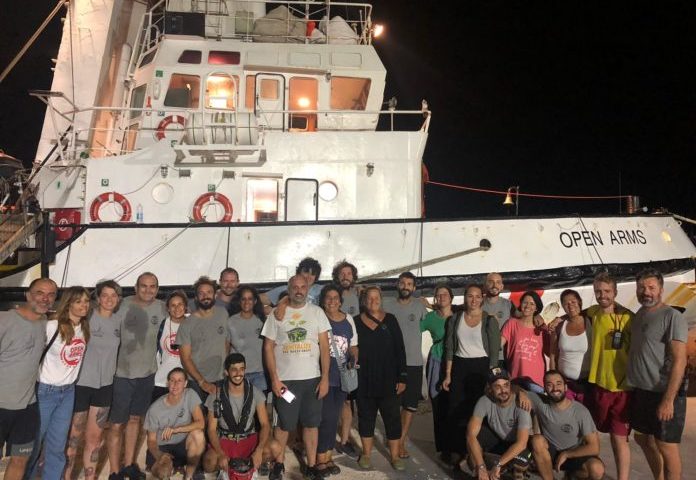 Rome (NEV), 21 August 2019 – Last night the migrants saved by Open Arms finally disembarked at Lampedusa. There to greet them at the dock of the Sicilian Island were also the volunteers and operators of Mediterranean Hope, Refugee and Migrant Programme of the Federation of Protestant Churches in Italy, along with a group of citizens and activists of the Forum “Lampedusa solidale”.

The 83 migrants saved by the Spanish NGO boat are currently in the hotspot on the island.

“In these days off Lampedusa – commented Francesco Piobbichi, social worker of Mediterranean Hope – we have been witnessing a great struggle for rights. Open Arms has indeed stimulated our Constitution in the present”.

The Open Arms drama began to unfold 19 days ago and yesterday, finally the Public Prosecutor’s office of Agrigento’s decision, with the disembarking of the migrants and the precautionary attachment of the ship.

In the last few weeks, the Federation of the evangelical churches had repeatedly stood up for the protection of the rights of the people saved by Open Arms, also offering their willingness to accommodate the migrants.

“A positive solution, yesterday’s one – declares Paolo Naso, coordinator of Mediterranean Hope – , because it put human rights at the forefront. Disappointing, because Europe’s response was slow in coming and Italy’s one was actually non-existent, conditioned by a political crisis that cannot freeze humanitarian rights. However, these hard-working alliances of the civil society, associations and churches give us faith. As protestants, thanks to our operators and volunteers in Lampedusa and with our national offices, we have made a contribution for a positive solution to this affair, convinced that the Gospel is not an identitarian symbol good for speeches on special occasions, but a light that must guide choices and behaviour in our life, starting from saving our persecuted and injured neighbours”.

While the migrants of Open Arms are greeted at Lampedusa, the other NGO ship, Ocean Viking of Sos Mediterranée and Médecins Sans Frontières, that has been waiting for 11 days, with 356 people aboard, is still literally in high seas, between Malta and Sicily, awaiting a safe haven.

The Italian Union of Seventh-Day Adventist Christian Churches (UICCA), “observer” of the Federation of Protestant Churches in Italy (FCEI), through its humanitarian agency, is also one of the organisations that contribute to supporting the ship Ocean Viking.