For a stranger, strangers do not mourn 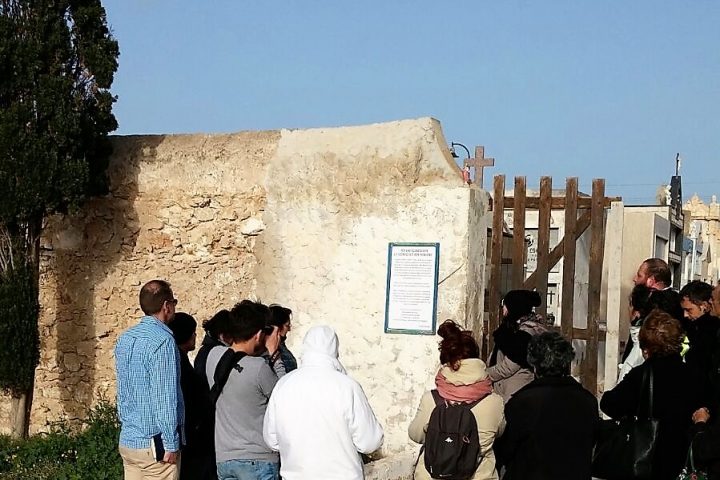 “We have a duty to tell. When you come here with your children or grandchildren, tell them about these graves, about the people who are buried here and how they died. Remembering names is an act of humanity.” These are the words that float in the wind on a sunny Saturday afternoon in the cemetery of Lampedusa. Together with representatives from the Lampedusa Solidarity Forum, we gathered around the plywood plaques decorated with a frame made of wood collected from abandoned boats used for who knows how many crossings. White panels with names, dates, details of a life otherwise forgotten. A simple ceremony, like the simple things in a family. Dark sunglasses, emotions, flowers and silence interrupted only by respectful thoughts and prayers of believers and non-believers: these are the underlying themes of the culmination of this 2-year path of research and persistence.
We can now remember the names of Welela, Eze and Yassin, and reconstruct their stories. Three more in a cemetery, like the one in Lampedusa, where we still do not know for sure how many migrants are buried. This is a small gesture, which makes us keepers of the memory, together with many other operators, activists and ordinary citizens working on the Mediterranean side. This is little or nothing compared to the amount of work that should be done to restore an identity to thousands of dead, missing or unidentified migrants. A powerful gesture if you look at the responsibilities, at those who have died and are missing, forever condemned to be erased by a sort of “damnatio memoriae” of our times, resulting mainly from the bureaucratic quagmire of the procedures laid down by the current border policies or by gaps in the regulations.
A due gesture when you consider the hundreds of bodies identified only by a serial number or those never identified because no one wants to or no one can, or because in the end indifference prevails in an emergency. And it prevails in the face of the greatest tragedy of our times: thousands of people die at sea trying to reach Europe, most of them remain nameless and become a ghost for families who do not know what have become of them. According to official estimates released by the World Organisation for Migration of the UNHCR, fifteen thousand migrants have died or are missing in the Mediterranean Sea since 2011, with 485 only in the first two months of 2017.
Thousands of families are living in limbo, even a legal one. Without positive identification and a certificate of death, for example, you cannot indicate the names on the tombstones, and you also cannot initiate the procedure for a possible repatriation of the remains, wills, inheritance, new wedding bonds. Thousands of families are not an emergency or a unique catastrophic event, but a constant reality that needs to be addressed with a coordinated and coherent approach. There are many investigative and monitoring initiatives that over the years and in different parts of the world have tried to meet the need of a systematic survey and shared database that could ultimately contemplate the involvement of the families of origin, a starting and end point of the migration experience. Those responsible (after the tragedy of 3 October 2013, Italy was the first country with a forensic anthropology project set up for this purpose) believe it is indispensable in order to ensure that the dead are not only considered invisible actors on a public stage or commodities through which is measured the balance of power in the Italian and European institutions.
As we have often felt on our skin, Lampedusa is an island of transit. It is a place of almost meeting, where we come face to face with life and death on the Favaloro pier. A few moments that have the risk of leaving no trace if we do not constantly remember them and remember that every life is unique, it is exceptional and should be treated as such.

“Bereavement in their death to feel
Whom we have never seen –
A vital kinsmanship import
Our soul and their’s between.
For a Stranger – Strangers do not mourn”