Barbed Wire Over the Sea 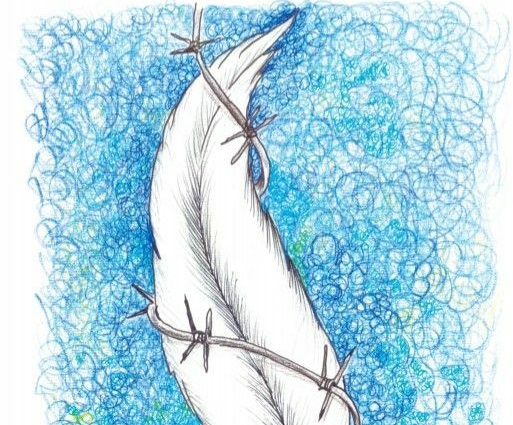 Rome (NEV), 7 September 2018 – “Sul mare spinato” (Barbed Wire Over the Sea), published by Com Nuovi Tempi, is the new collection of drawings and thoughts by Francesco Piobbichi, a humanitarian worker who has been living in Lampedusa for four years, and a staff member of the Migration Observatory of Mediterranean Hope, a programme for refugees and migrants organised by the Federation of Protestant Churches in Italy (FCEI).

Already the author of “Pictures from the border” (Drawings from the border) published by Claudiana, Piobbichi returns to the important theme of borders, telling the story of a sea that becomes barbed wire, a “frontier that kills”, as he himself defined it in the foreword of the book.

The book consists of twenty-two stories of journeys, life and death, each told with a drawing and some phrases, a sort of civil poetry, simple and lapidary. There is the terrible story of Segen, who died immediately after his arrival in Pozzallo; the story of the Eritrean women who thank their God by singing to him; the story of a child attached to an IV tube drawn like a small commander on a rubber dinghy.

There is Medusa awakened by the selfishness of men whose hair had become “steel that cuts the skin” and a final drawing of “Il Tempo della Scelta” (The Time to Choose): “We have decided where we want to stand. In this struggle that continues to repeat itself in the waves, we uphold that whoever saves a life, saves the whole world.”