(NEV) The Mediterranean Hope operators on the island have collected testimonies of torture and violence suffered by migrants in Libya, which demonstrate the urgent necessity to create safe and legal passages

Rome (NEV), 19 October 2018 – “Nour drew the cells and 4 security doors on a sheet of paper.” Separate cells for men and women. And she recounted how every night the women were taken and brought to the cell after the third security door. 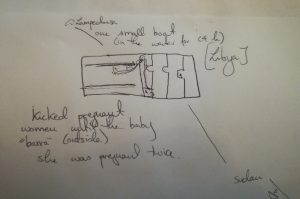 Four men for each woman. Four Libyan militiamen for each Somali or Eritrean prisoner. And every evening they were repeatedly raped and assaulted. By four strangers. Every night. For more than a year. And when one of them got pregnant, she was taken to the same place and kicked until she aborted or worse. Until the foetus came out of her body”. This is one of the testimonies collected by the operators of Mediterranean Hope (MH), the refugee and migrant programme organised by the Federation of Protestant Churches in Italy (FCEI), who live on the island of Lampedusa and work in the Observatory providing the very first reception and mediation services to migrants. Although the public debate in recent weeks has shifted to other issues, the situation in Libya continues to be very critical and migrants trapped there testify of detention conditions at the limit of survival with constant violations of human rights. Nour’s testimony was collected in the last few days, she arrived in Lampedusa with the most recent landing that took place on 13 October.

In the meantime the landings continue, even though the island has disappeared from the television and media programs as a result of the criminalisation campaign of the NGOs and the impossibility to carry out SAR operations. Tunisians arrive in small groups and with wooden boats, while the journey from Libya seems to have taken new forms, with many transfers between small and larger boats until the arrival in international waters, as recounted by Imad, who also arrived on 13 October: “2700 dollars for the journey from Egypt to Lampedusa, including the trips by truck and boat. Detention, first in a house and then in a sort of refugee camp. Lots of violence and hunger. And then the journey taken with 33 other people coming from Lebanon, Egypt, Somalia, Eritrea, on a small boat that loaded them on a ship and unloaded them 5 hours from the coast of Lampedusa to allow them to reach the coast on their own. The “darker” people were made to stay in the cargo hold while the Egyptians and Libyans could stay on the bridge.”

Migrants locked up in the island’s hotspot often manage to arrive in the city and MH provides them with an internet point to contact their families to reassure them that they have arrived safe and sound, across the sea. This is when the operators of the FCEI programme have the opportunity to speak with the migrants and collect their stories: “Abdi departed from Eritrea, crossed Ethiopia, and then passed through South Sudan until arriving in Libya where he spent a year and seven months in a closed and cramped place, beaten every day by the “Gangsterman”, until they made him call his mother in Eritrea asking her for a ransom of 11,000 dollars. Only after the ransom was paid was he able to board a boat for Lampedusa. Zakaria comes from Asmara and arrived in Libya through Sudan. He was imprisoned there for two years, being moved from city to city, until the boarding, journey and landing in Lampedusa”.

Marta Bernardini, MH operator on the island said that “these stories, full of brutality and violations of human rights once again demonstrate that we must work on creating safe passages for those fleeing war and poverty, that humanitarian corridors are a possible solution to counter the cynicism of traffickers, the policy that has closed all legal routes of access to Italy and Europe, and the selfishness of those calling for closed borders and naval blocks”.

The names of migrants reported in this article have been changed to protect the privacy of the people who have entrusted MH with their story.