Refugees: On March 28th a New Arrival from Lebanon Through the Humanitarian Corridors by the Protestant Churches and The Community of Sant’Egidio 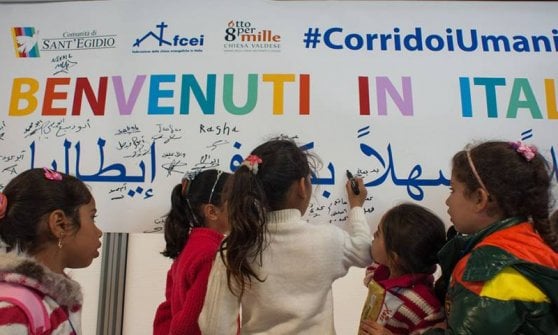 The 54 Syrian refugees will be welcomed by associations, parishes and communities in different Italian regions to immediately facilitate their integration. A welcoming event with press conference at the Fiumicino Airport on Thursday 28th

Rome (NEV/CS19), March 25th, 2019 – On Thursday 28th  54 Syrian refugees will arrive in Fiumicino  through the Humanitarian Corridors promoted by the FCEI , the Community of Saint’Egidio and the Waldensian Board in agreement with the Ministries of Interior and Foreign Affairs. As the other more than 2,000 people who have arrived in Italy so far (among them 1,500 from Lebanon), the refugees will be welcomed by associations, parishes and communities in different Italian regions and immediately started their integration process, by learning Italian, going to school and attending job placement, once obtained their refugee status. The humanitarian corridors, entirely self-financed by the entities that promoted them and thanks to the generosity and voluntary commitment of many Italians, represent an efficient model, which combines solidarity and security, so much so that humanitarian corridors have already been activated in other countries such as France, Belgium and Andorra. Thus, since February 2016 this model has allowed about 2,500 people to reach Europe in a safe and legal way.

The welcoming event and the press conference will be held on Thursday, March 28, at 11.00 am. Journalists should arrive no later than 10 am at the Terminal 3 of the Fiumicino airport (gate 3, next to the information office). They will be accompanied to the conference venue.

Paolo Naso, by FCEI Marco Impagliazzo, President of the Community of Saint Egidio Emanuela Del Re, Deputy Minister of Foreign Affairs, representatives of the Ministry of the Interior, and Giorgio Raspa, President of the Italian Buddhist Union will attend the event.