The “Lo sguardo dalle frontiere” (A Look from the Border) editorial is written by the operators of Mediterranean Hope (MH), the project promoted by the Federation of Protestant Churches in Italy (FCEI). This week’s “Look” comes from Lampedusa and was written by volunteer Miriam Bovi

Lampedusa (NEV), 12 August 2021 – The sky and water merge. The horizon is swallowed up by a deep blue that seems to go on forever. The sea is calm for now, immense. Glimpses of a small island begin to emerge. It’s all white, maybe that’s it, it’s triangular, a little elongated, it doesn’t look very big.
Yes, we’ve arrived. I can see the Porta d’Europa. Further on, in the open sea, the Coast Guard and a makeshift boat… or bad luck, who knows.

The steppe, the desert, the palm trees, it does not look like Italy. The trees are sparce and the unrelenting August heat leaves you gasping for air, along with the invasion of tourists who converge on the island. Three planes land and take off non-stop in the only airport that is barely discernable.

I’m really lucky, I arrive by plane. No, let’s not start by making everything seem rosy, I don’t have the right to do that. I think of the stories of those who arrive with the burns of a scorching unforgiving sun (in the ‘best’ of cases), or the fear of being swallowed by the waves driven by the unpredictable wind and all the tragedies that mark the faces. Time passes slowly, leaving behind a traumatic past but also loved ones and memories. I dare not imagine what it feels like to be able to find the courage to face this crossing between death and life. How many hopes and how many fears for a choice conditioned by reasons that are difficult to understand from a biased gaze, accustomed to the comfort of safe transport, a dignified welcome and unlimited freedom.

The reasons are different, as well as the needs of every person who emigrates but this is not the question. How can we compare ourselves, even for an instant of an untimely remark, to people for whom the absence of rights and mobility has been normalized, justifying it with the fact they came from the ‘wrong country’, from which one can only start through ‘illegal’ means, risking one’s life?
What then remains of ‘legality’, if this itself does not guarantee human dignity, salvation, the alternative of a new beginning? Everything seems so strange and unfair when you close your eyes to so many people forced to arrive in this barbaric, unworthy, and insecure way.

The first landing I witness is on the rocks of a ‘non-pier’, at night. An independent landing apparently. Usually, the landings are on the commercial pier, on the Favaloro pier and rarely on some cove. Paradoxical to have to use this word to tell such an absurd, exhausting, inhuman situation. How can we compare ourselves to the point of feeling threatened by the arrival of other cultures that over the centuries have helped shape our territory, resources, livelihood and even our faces? Migrations have played a role in the history of every individual; they design the world. Why do we continue to claim to reduce their effects?
Yet, there it is, a wooden boat, in very precarious conditions, spotted near the coast. It must be guided to shore by the Coast Guard or the Guardia di Finanza, paying close attention to the docking but above all to the fact that it does not capsize, since it is very small for the large number of people on board.

They await the arrival of the authorities to begin. The medical staff of the Ministry of Health consists of one or two people, Doctors Without Borders is here, as well as the only ambulance on the island. Frontex’s ‘border controllers’ bombard the newcomers with questions before they even have a chance to recover from the journey, if you can call it that. UNHCR workers arrive, for protection, mediation and tend to all kinds of other needs.
The improvised landing on the rocks takes us by surprise, so we decide to start helping two families somewhere with a little more light, away from the lights of a television crew and Finance office.
One of the girls is afraid of being separated from her father; the situation is chaotic but we reassure her: it’s women and children first. She takes me by the arm and looks into my eyes for an answer. Her dad joins her a few minutes later.

Members of Save the Children immediately ask if there are any unaccompanied minors. They help direct and organize of the lines of people to the minibuses that will take them to the hot-spot, who arrived after a considerable wait. There are two or three coaches that go back and forth, often with passengers jumbled one on top of each other, even in the trunk.
Together with them and the UNHCR staff we take them in pairs to visit the bathroom, which are not very hygienic. Sister Franca and Sister Paola are with us to distribute the water and offer that little touch of humanity that can often be missing in the institutional management of landings: a chat or a smile go a long way. Some juice for the minors, stuffed toys for little ones (if there are any), thermal blankets but above all a focused monitoring and welcoming of the new arrivals, which, hopefully, helps to appease the actions of some Green Basques members – which can be a little aggressive at times – and the presence of other police forces shouting at them to remain seated.

The scene unfolding before me is nothing short of shocking. The group of men who have just arrived from Tunisia huddles together amidst the police, crouching next to each other; standing in a corner a disturbing figure with his truncheon plainly visible. Yet, for several hours or days, they have been without water or food. They have very few belongings with them, sometimes these are left on the boats.
A plane passes over their heads; their eyes follow it in unison with a look full of contrasting emotions, as they continue to wait. Too intent on watching the plane, they miss the miracle of a shooting star behind them, signalling, perhaps, a beacon of hope. 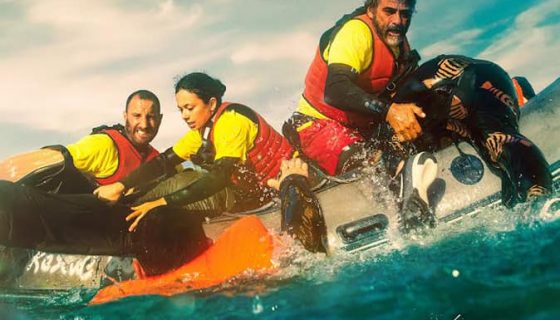