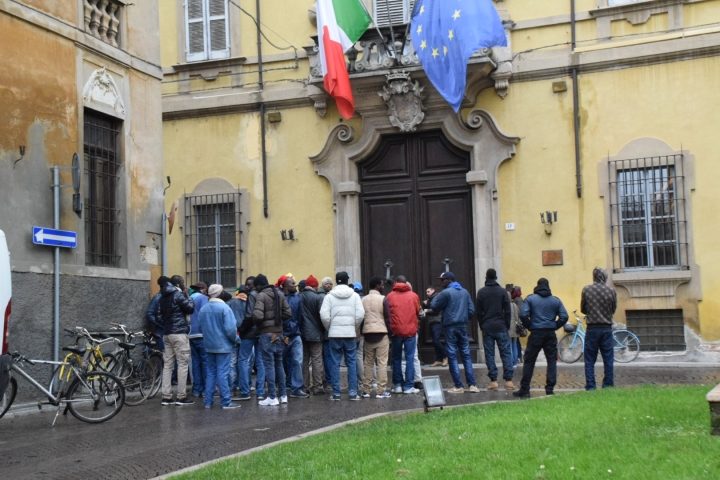 Scicli, Ragusa, April 6th, 2016 – It seemed a day like many others but that day we should go to the police station. Once crowded the van, we left towards Ragusa. In Ragusa, Amin from Somalia, Moussa from Mali, Mohamed Abdul Karim and Bouba from the ivory coast would submit their request for asylum.

It was like going on a school trip. Everyone was excited. After spending days on preparing them and explaining what the asylum protection meant, they were hardly able to understand why the procedures were so complicated. They were not looking for a better life, they would spend their life in a country that from abroad looked very nice, friendly and safe.

They stopped smiling once seeing so many policemen. Someone got silenced, others meet a friend or relative who had not seen since landed in Pozzallo. The situation turned into a little party. Those who were shy hold my bag as they were afraid of being abandoned there.

Then arrived the tutor. What support could offer a tutor to a boy so emancipated that, despite his young age, has lived all that maybe in a lifetime someone ever live? This kind of operators are very necessary for the defence and protection of the rights of unaccompanied minors. Tutors are often not well understood and accepted by those who already feel men and carry on their shoulders the weight of an entire family waiting, for them at their home town.

Then, we all entered the office. The cultural mediators welcomed us warmly because they had lived the same experience of the guy who was sitting in front. And then, the interview begun eyes low and weak voice, many fears and many horrible memories would be back again: “I do not remember the name of the Libyan city where I was, I only remember that I was in prison and beaten every day until someone has paid to get me out of that hell.” Moussa has not seen his parents and his brothers since she was 6 years old and does not know what happened to them. He was adopted by a married uncle. His uncle was a cop, but when in Mali the situation worsened, the uncle hid Moussa on a truck and sent him to Algeria. But for Moussa the journey continued towards Libya in which he was imprisoned twice and twice he tried to go back home in Mali. But, where is home?

The interview ended and then they took his fingerprints. Moussa’s hand skin was too dry and his fingerprints were not properly taken. The operator took a spray bottle to moisten with water and Moussa winced by fear as he did not expect it. Then the operator got Moussa’s fingerprints right. All of them were filed inside Eurodac. Moussa looked at me and asked what was Eurodac. Spontaneously, the operator said “if you escape and they catch you in France, you will be sent back here, as now you are registered o European database.” Moussa did not understand and asked why he could not reach France as a free man, as everyone in Europe is free to do wherever they want. Silence felt not the room.

Once ended the bureaucracy, we went back home. And it almost a celebration. Those who were still waiting to go to police station went to Moussa and started asking about it.

After a week there was the delivery of the permit of stay for asylum seekers. After lunch, while we were still sitting at the table, the distribution begun they really celebrated!

Moussa grasp his paper as it was a prize earned following a long and never-ending match. Moussa knows that the game is not over yet; there the commission to deal with, there is also the transfer to another place where he hopes to find other friends had been lost sight of for some time.

But for this guy as for many others, the journey is still very long. It is a trip inside the Italian bureaucracy, finger prints, documents which will be very hard to obtain or, unfortunately, will not arrive at all.

“ Who in the journey of life has lit one candle in the dark hour of someone has not lived in vain.” (Mother Teresa from Calcutta).